Although the mainstay of Indian floriculture is growing traditional flowers in open field, production of cut flowers under polyhouses, production of potted plants, plug plants, landscaping plants, grasses etc., is increasing day by day. All the segments of floriculture encounter significant manifestation of phytoplasma diseases. Due to inadequate awareness among the stakeholders many a times the affected plants are further propagated with a mistaken premise that the plants are novel variants. This particular situation is compounding the spread of phytoplasma among horticultural crops. The research efforts on the phytoplasma diseases though have been in vogue over three decades, their detection, etiology become clearer with the advent of molecular techniques. The remedial measures advocated so far focused mostly on vector management and prophylactic measures rather than curative measures.

The interface was inaugurated by Dr. B. Srinivasulu, Registrar, Dr.Y.S.R. Horticultural University, Venkataramannagudem, Andhra Pradesh who worked extensively on phytoplasma diseases. While welcoming the delegates and the farmers Dr.K.V.Prasad, Director, ICAR-DFR, Pune explained the background for organizing the event near Kadiyam a nursery hub. He explained that in a quest to introduce new plant types and variants from other nations or continents there is greater threat of bringing along invasive plant propagules, weeds, pests and pathogens inadvertently. The plants infected with viruses, viroids and fastidious prokaryotes are of major concern as they are easily vectored by insects and very difficult to manage once established. These ornamental plants can act as reservoirs for the potential pathogens that can devastate our staple crops. While the awareness on virus infection has increased among farmers in the last decade, the knowledge about the vascular inhabiting insect vectored fastidious prokaryotes like phytoplasma and xylella is meager. In order to bring greater awareness on the issue Dr.N.K.Krishna Kumar, Hon’ble DDG (Horticulture Science) ICAR has advised the ICAR-Directorate of Floriculture Research to organize Farmers – Academia Interface on ‘Phytoplasma Diseases in Horticultural crops: Current Scenario and Future Challenges’ for the benefit of the nursery growers of Kadiyam. Hence the event was organized along with the XXV Group Meeting of the All India Coordinated Research Project of Floriculture so that the interaction would be helpful for both the Scientific and the nursery grower fraternity. The topic was introduced to about 300 farmers in Telugu by Dr.M.Krishna Reddy, Head, Division of Plant Pathology, IIHR, Bengaluru followed by a question and answer session with the farmers and scientists from across the country under the chairmanship of Dr.B.M.C.Reddy, Hon’ble Vice Chancellor, Dr.Y.S.R. Horticultural University, Venkataramannagudem, Andhra Pradesh. Experts from Indian Agricultural Research Institute, New Delhi, National Center for Cell Sciences and Directorate of Floricultural Research, Pune made very informative presentations on the topic. Dr. Amit Yadav, Scientist, National Center for Cell Science made a detailed presentation on Candidatus Phytoplasma – Characterization, taxonomy and diagnostics followed by Phytoplasma diseases in flower crops current scenario, future challenges and their management by Dr.G.P.Rao, Principal Scientist, IARI, New Delhi, Insect vectors of phytoplasma diseases by Mr. Girish K.S, ICAR-DFR, Pune and Phytoplasma and phytobiosecurity current scenario and future challenges by Dr.Prabha K, ICAR-DFR, Pune. The interface was attended by the scientists from 21 AICRP centers, resource persons of AICRP group meeting, scientists from Dr.Y.S.R. Horticultural University, officials from state horticulture department and about 300 growers. All the presentations were very much appreciated and well received both by the scientific fraternity and nursery growers.

A pictorial and informative booklet on phytoplasma diseases in ornamental crops in English and Telugu was released for the benefit of the scientists and farmers. Similarly a CD having the electronic version of the base paper on Phytoplasma Diseases in Horticultural Crops: Current Scenario and Future Challenges authored by Prabha.K, Girish, K.S, Nitika Gupta and Prasad, K.V. was also released on the occasion.

The Indian Nurserymen Association, Kadiyam recognized the yeomen services rendered by about 16 veteran and 16 young nurserymen by felicitating them on the occasion. Dr.B.M.C.Reddy, Hon’ble Vice Chancellor, Dr.Y.S.R. Horticultural University honored all the identified members in the presence of other dignitaries. 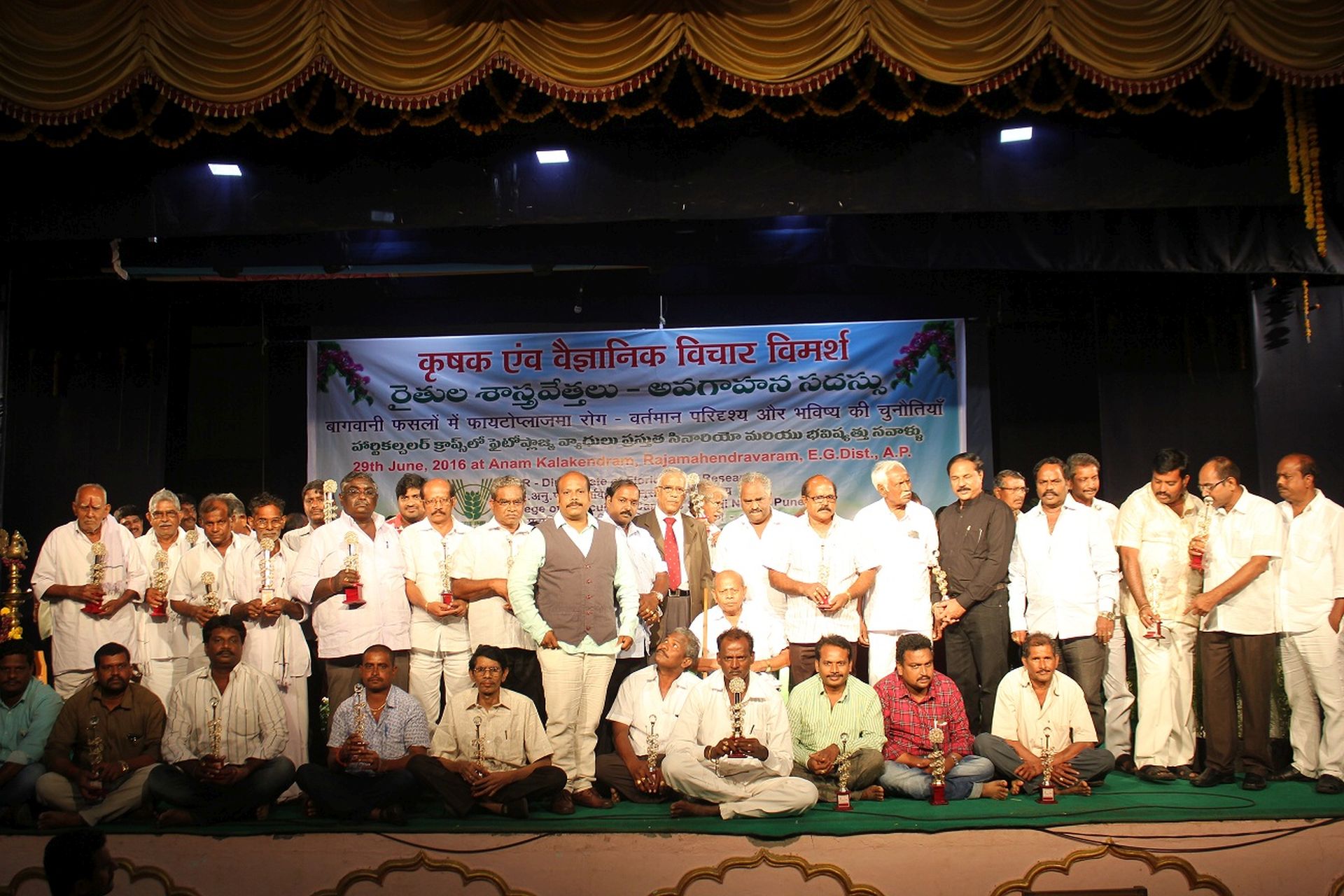 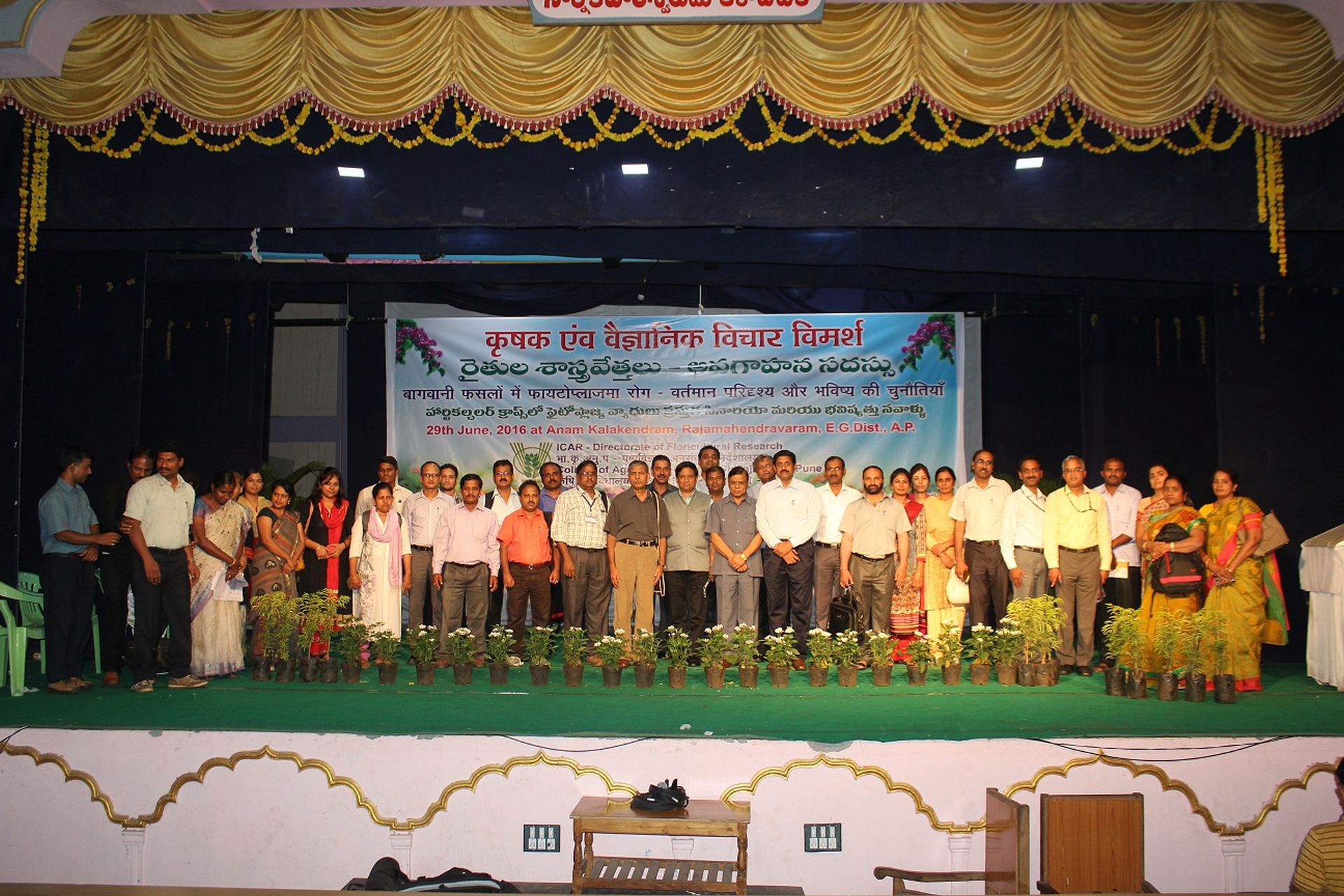 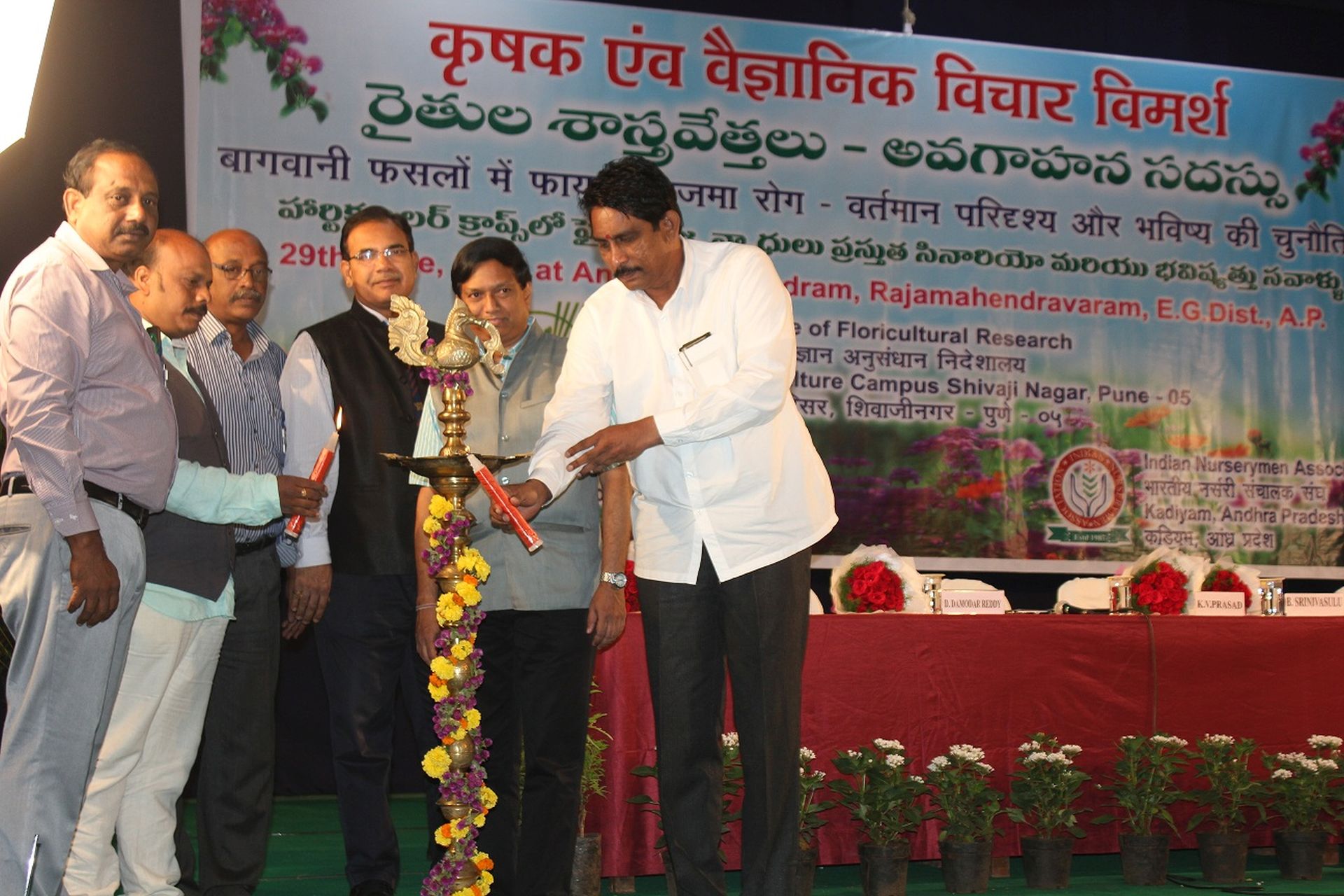 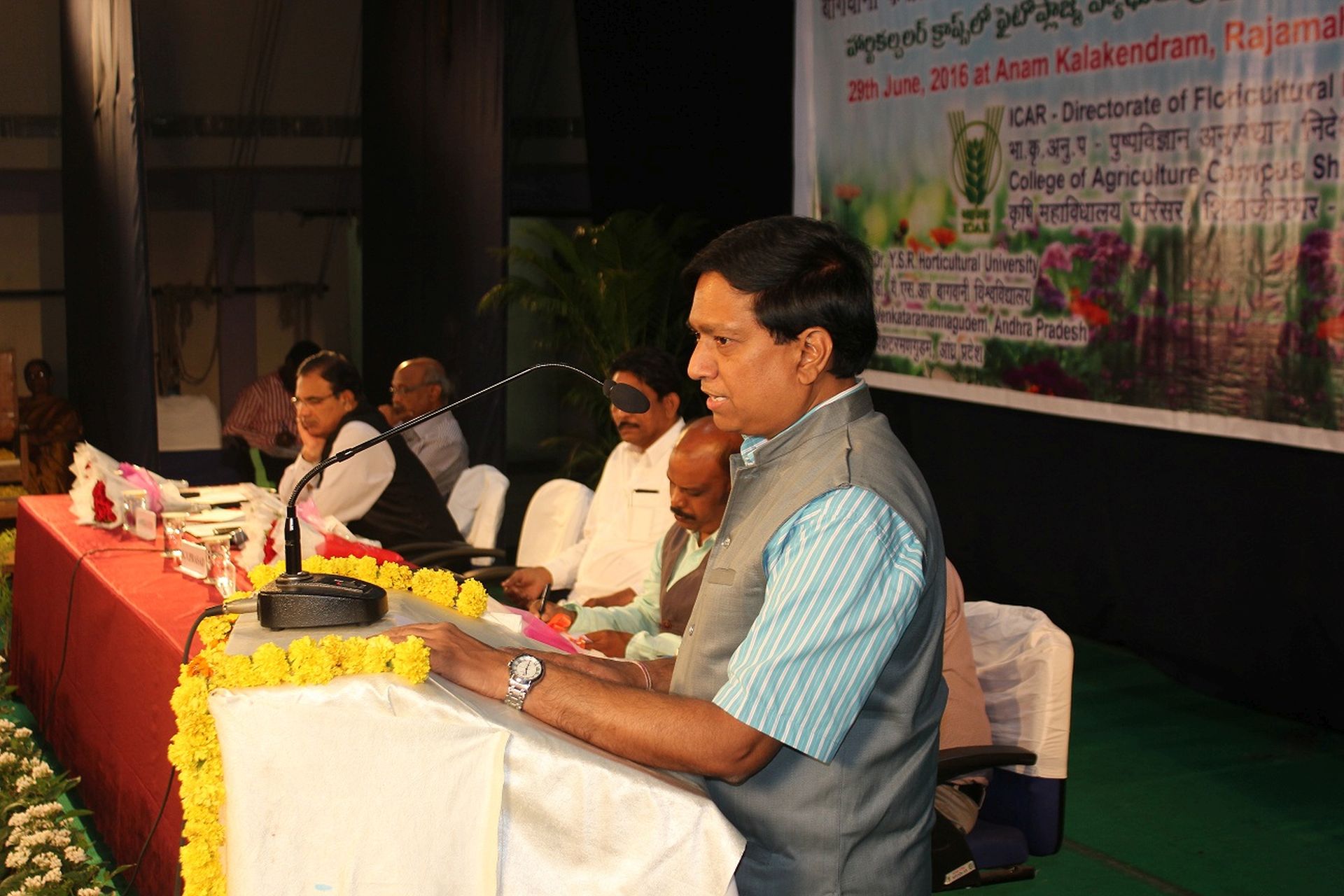 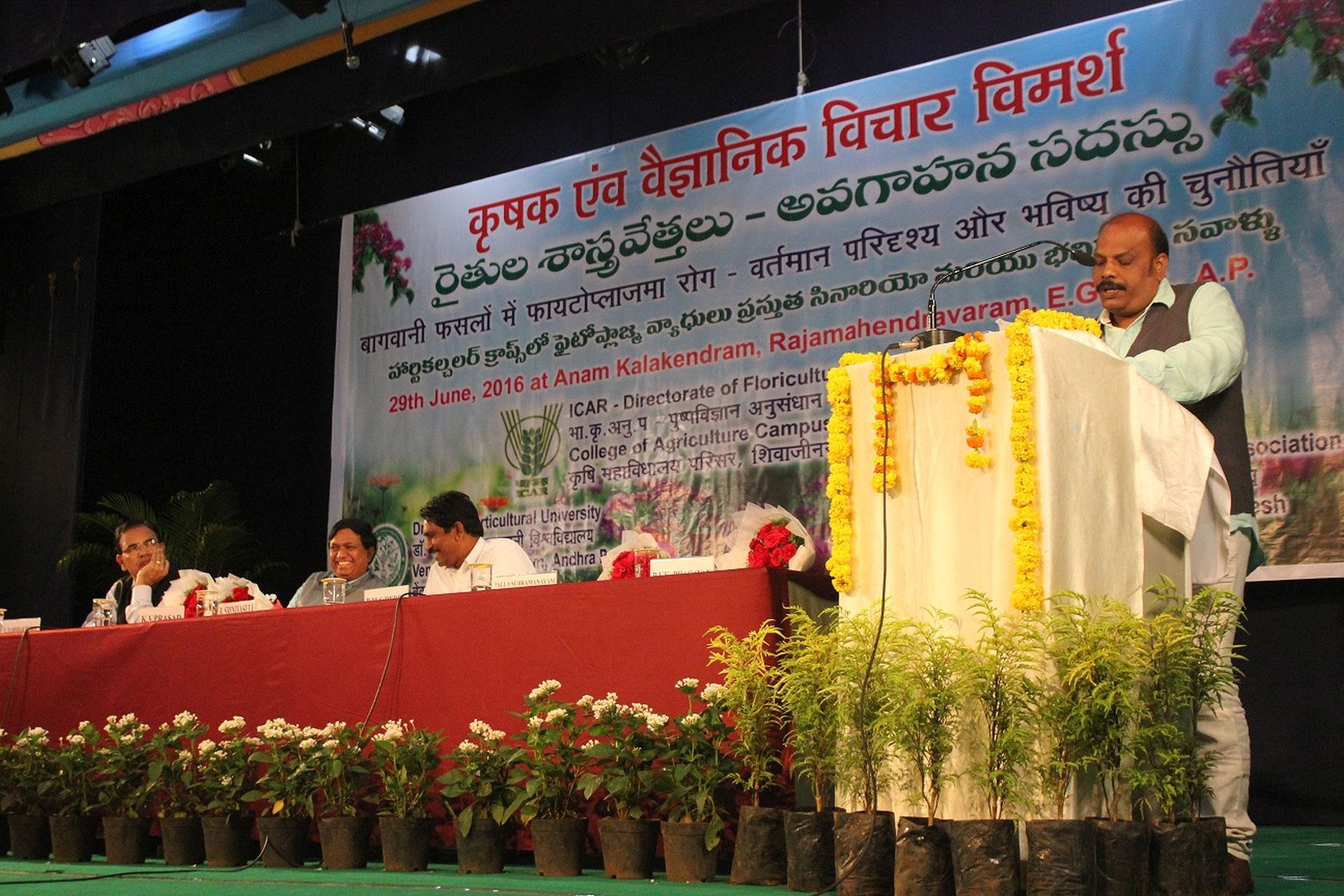 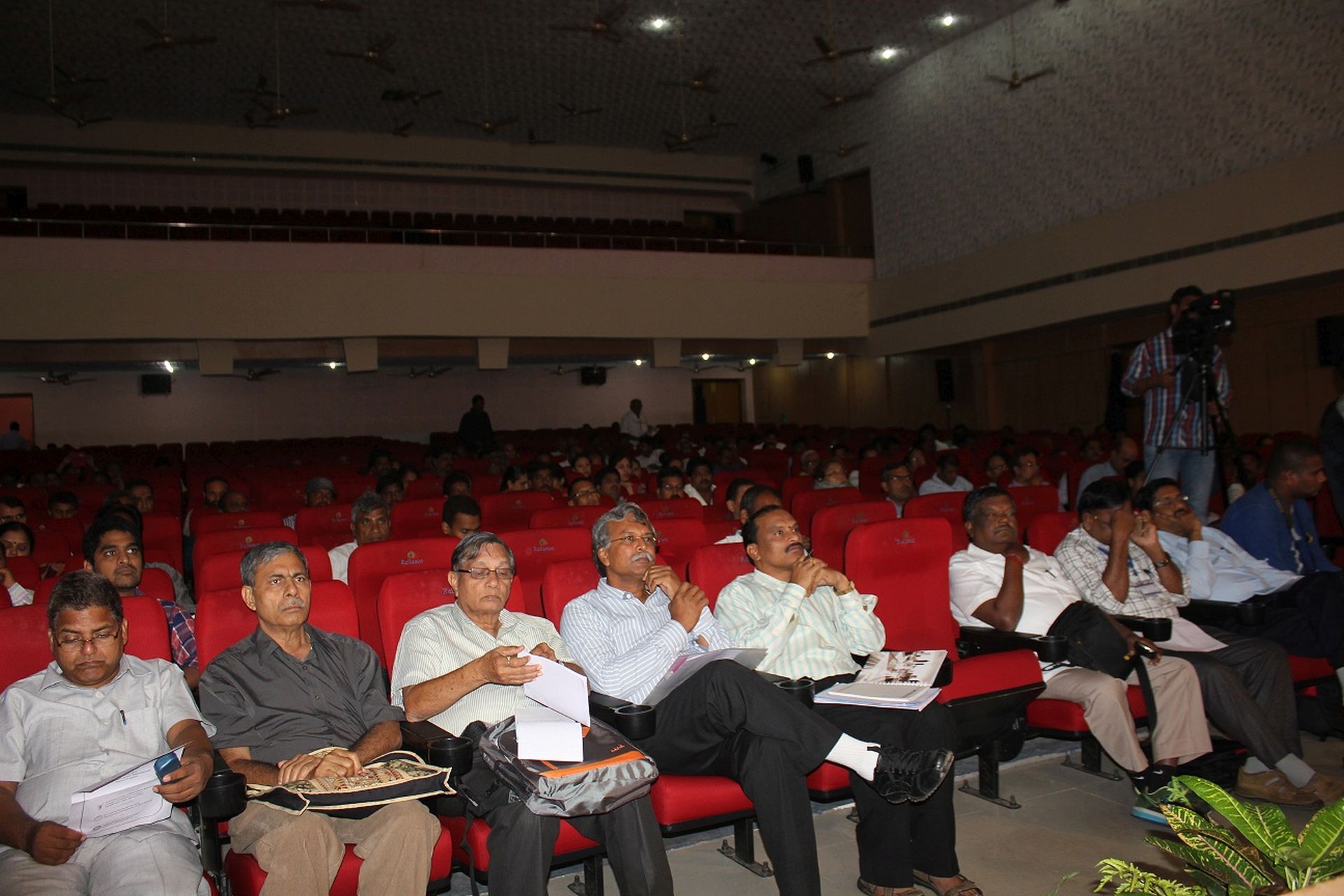 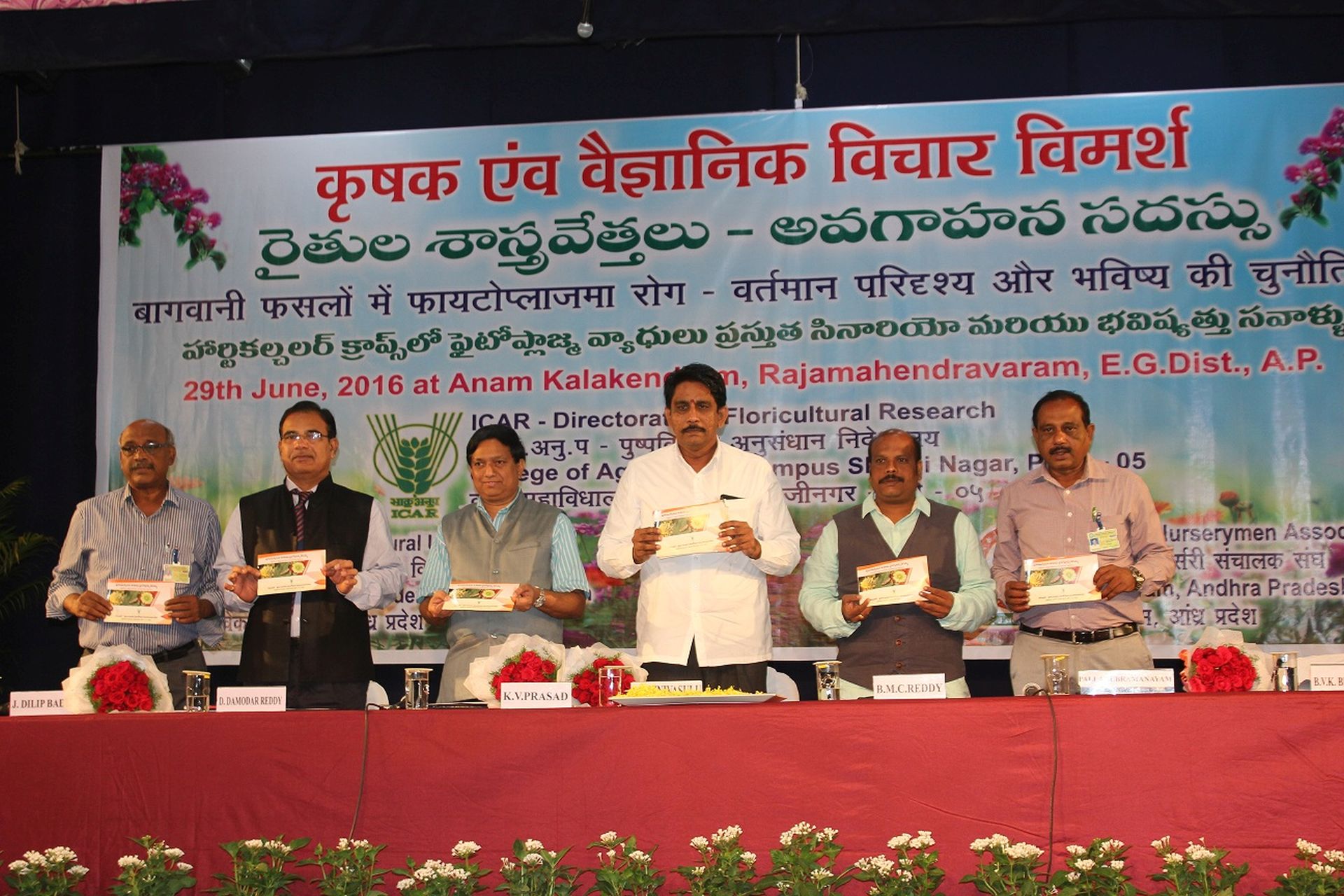 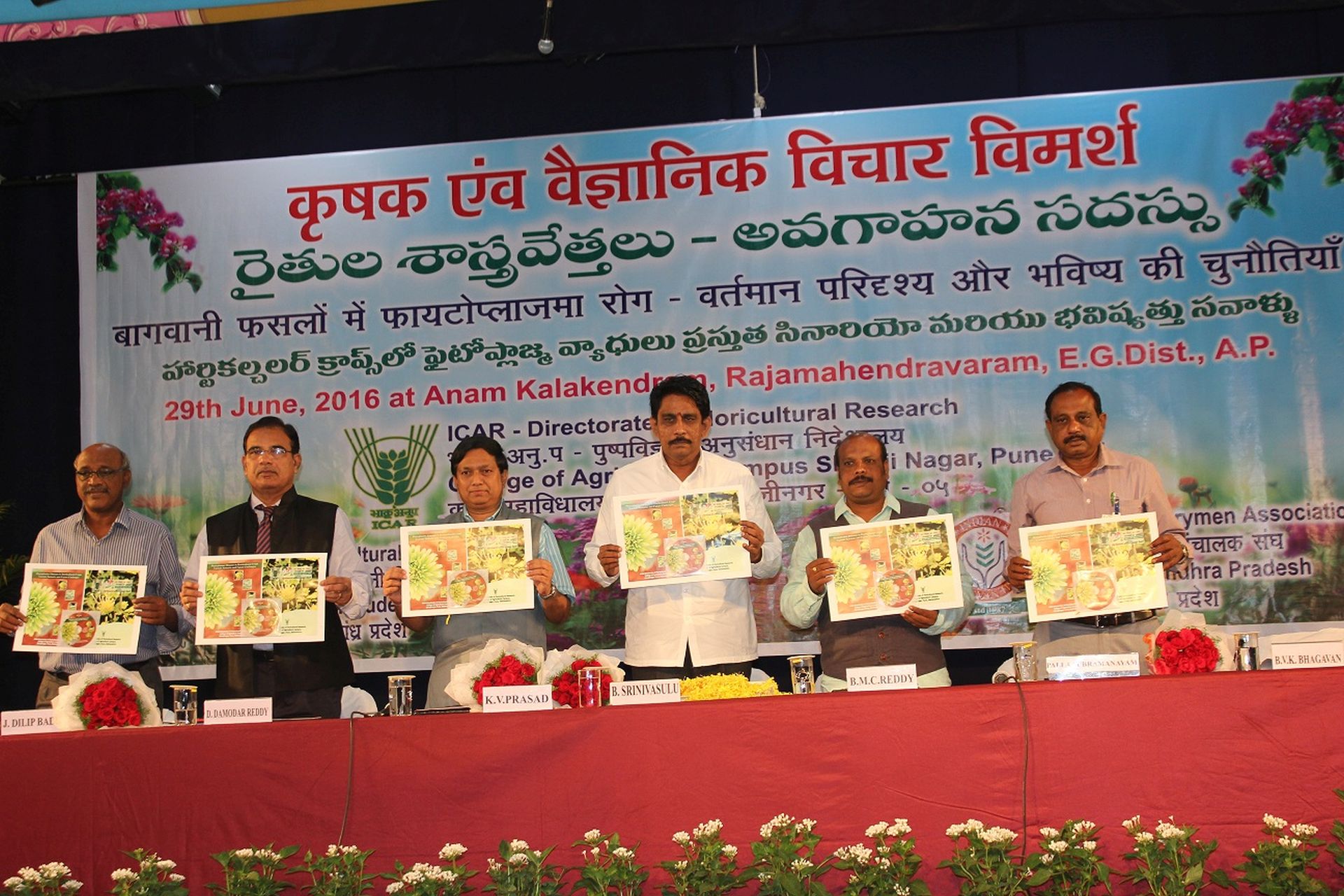 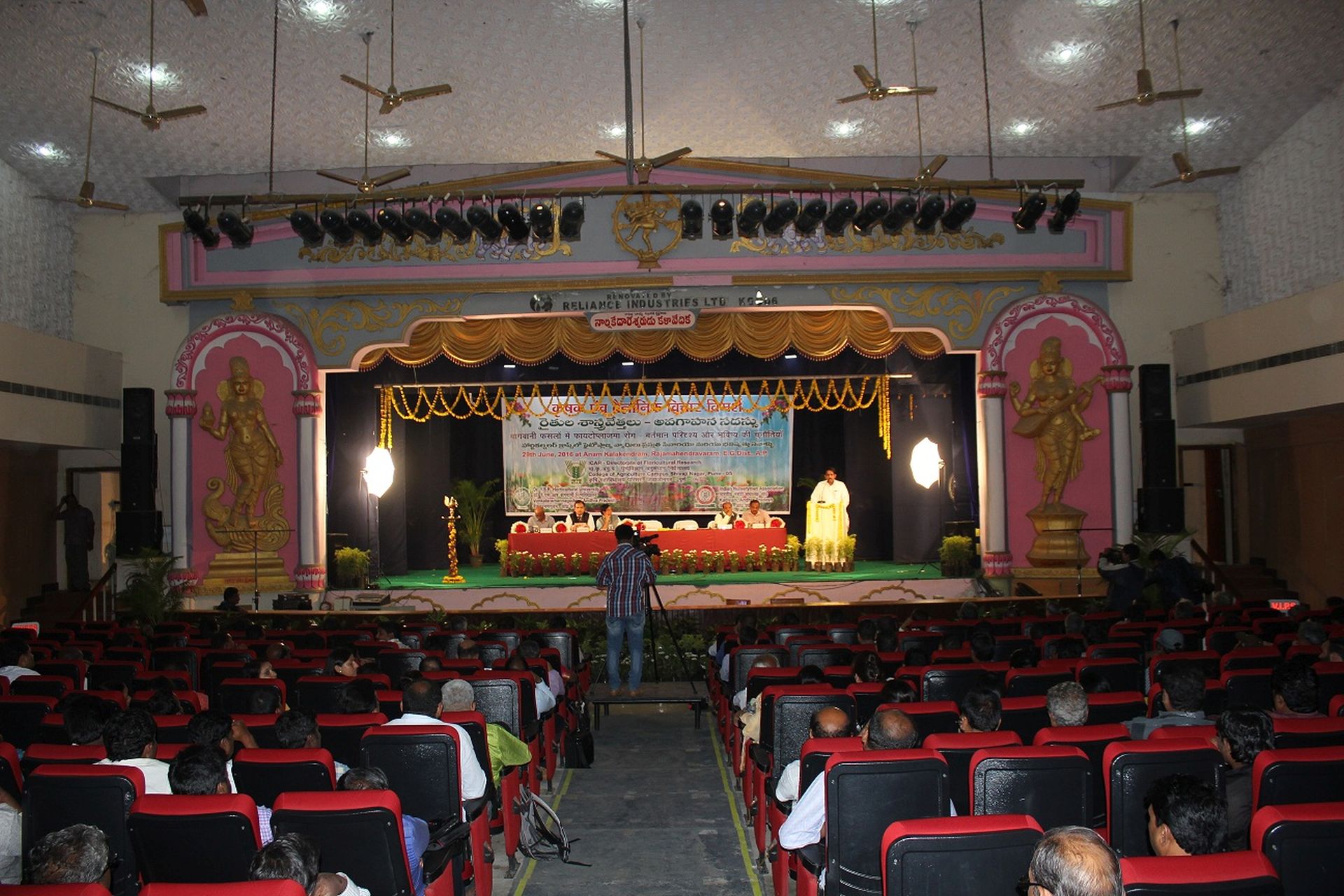 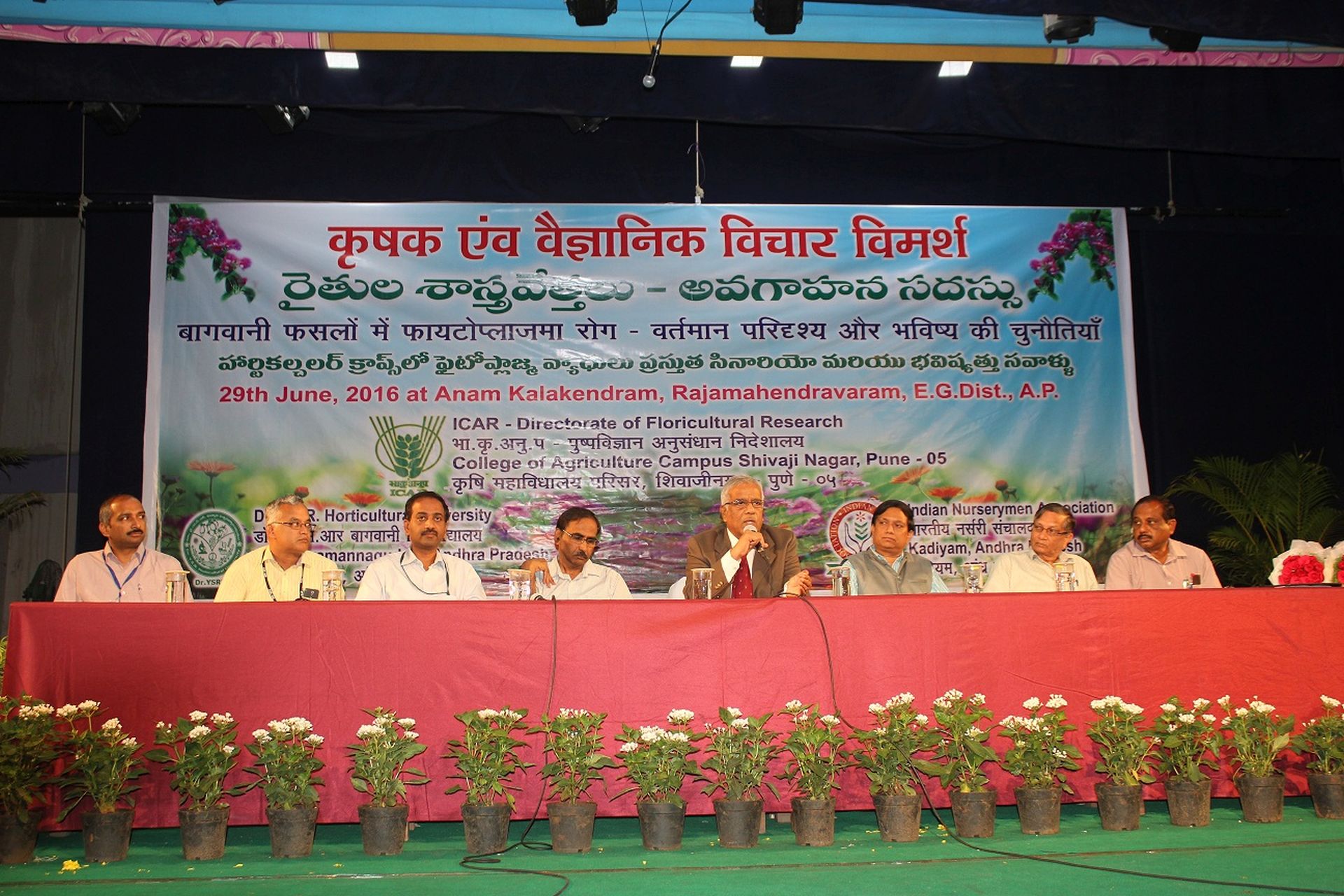